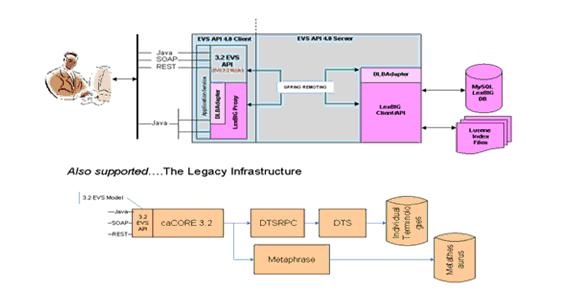 The open source interfaces provided as part of caCORE LexEVS 5.x include Java APIs, a SOAP interface, and an HTTP REST interface. The Java APIs are based on the EVS 3.2 object model and the LexBIG Service object model.

You cannot integrate caCORE 3.2 components with caCORE LexEVS 5.x. If you used multiple components of caCORE 3.2 (for example, EVS with caDSR), you need to continue to work with the caCORE 3.2 release until the other caCORE 4.0 components are available.

The LexBIG object model was developed by the Mayo Clinic. In its native form, the associated API assumes a local, non-distributed means of access. With caCORE LexEVS 5.x, a proxy layer enables EVS API clients to access the native LexBIG API from anywhere without having to worry about the underlying data sources. This is called the Distributed LexBIG (DLB) API.

The DLB Adapter is not intended to represent a complete set of convenience methods. As part of the caCORE LexEVS 5.x release, the intention is that users will work with the DLB API and suggest useful methods of convenience to the EVS Development Team.

The LexEVS data source is the open source LexBIG terminology server. EVS clients interface with the LexBIG API to retrieve desired vocabulary data. The EVS provides the NCI with services and resources for controlled biomedical vocabularies, including the NCI Thesaurus and the NCI Metathesaurus.

The NCI Thesaurus is composed of over 27,000 concepts represented by about 78,000 terms. The Thesaurus is organized into 18 hierarchical trees covering areas such as Neoplasms, Drugs, Anatomy, Genes, Proteins, and Techniques. These terms are deployed by the NCI in its automated systems for uses such as key wording and database coding.

The NCI Metathesaurus maps terms from one standard vocabulary to another, facilitating collaboration, data sharing, and data pooling for clinical trials and scientific databases. The Metathesaurus is based on the Unified Medical Language System (UMLS) developed by the National Library of Medicine (NLM). It is composed of over 70 biomedical vocabularies.

The LexEVS 5.0 Java API bundled with the caCORE LexEVS 5.x release provides direct access to domain objects and all service methods. Because caCORE LexEVS is natively built in Java, this API provides the fullest set of features and capabilities.

The EVS API home page provides a user interface (UI) to the Java API. The interface is available at http://lexevsapi.nci.nih.gov/lexevsapi50.

The caCORE 3.2 release also provides an EVS 3.2 Java client API. The difference between the 3.2 and the 4.x clients is the back-end terminology server. caCORE 3.2 uses the proprietary Apelon DTS and caCORE LexEVS 4.x uses LexBIG. The API is the same and should only require minor updates to a client application wanting to migrate to the EVS 3.2 Java API provided with caCORE LexEVS 5.x.

After downloading the caCORE LexEVS client package, extract the contents of the downloadable archive to a directory on your hard drive (for example, c:\evsapi on Windows or /usr/local/evsapi on Linux).

The following files are required to use the Java API:

When building applications, include these files in the Java classpath. The included build.xml file demonstrates how to do this when using Ant for command-line builds. If you are using an integrated development environment (IDE) such as Eclipse, refer to the tool's documentation for information on how to set the classpath.

The caCORE LexEVS architecture includes a service layer that provides a single, common access paradigm to clients that use any of the provided interfaces. As an object-oriented middleware layer designed for flexible data access, caCORE LexEVS relies heavily on strongly typed objects and an object-in/object-out mechanism.

caCORE LexEVS systems use four native application programming interfaces (APIs). Each interface uses the same paradigm to provide access to the caCORE LexEVS domain model, with minor changes specific to the syntax and structure of the clients. The following sections describe each API, identify installation and configuration requirements, and provide code examples. 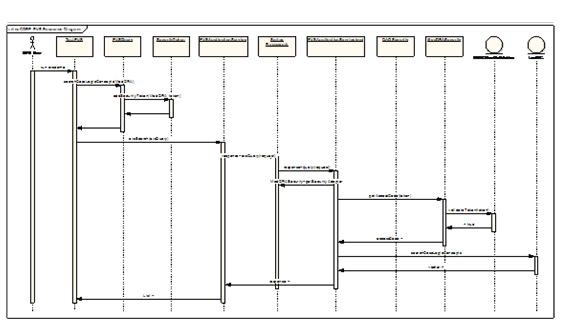 QueryOptions (link to javadoc) are designed to give the user extra control over the query before it is sent to the system. QueryOptions may be used to modify a query in these ways:

Example 4.1: Query By Example with No Query Options

The following table explains specific statements in the code by line number.

The following table explains specific statements in the code by line number.

The caCORE LexEVS Web Services API enables access to caCORE LexEVS data and vocabulary data from development environments where the Java API cannot be used, or where use of XML Web services is more desirable. This includes non-Java platforms and languages such as Perl, C/C++, .NET framework (C#, VB.Net), and Python.

The Web services interface can be used in any language-specific application that provides a mechanism for consuming XML Web services based on the Simple Object Access Protocol (SOAP). In those environments, connecting to caCORE LexEVS can be as simple as providing the end-point URL. Some platforms and languages require additional client-side code to handle the implementation of the SOAP envelope and the resolution of SOAP types.To view a list of packages that cater to different programming languages, visit http://www.w3.org/TR/SOAP/ and http://www.soapware.org/.

On the server side, Apache Axis is used to provide SOAP-based, inter-application communication. Axis provides the appropriate serialization and deserialization methods for the JavaBeans to achieve an application-independent interface. For more information about Axis, visit http://ws.apache.org/axis/.

The caCORE/LexEVS WSDL file is located at http://lexevsapi.nci.nih.gov/lexevsapi50/services/lexevsapi50Service?wsdl. In addition to describing the protocols, ports, and operations exposed by the caCORE LexEVS Web service, this file can be used by a number of IDEs and tools to generate stubs for caCORE LexEVS objects. This enables code on different platforms to instantiate native objects for use as parameters and return values for the Web service methods. For more information on how to use the WSDL file to generate class stubs, consult the specific documentation for your platform.

LexEVSAPI provides a tool to create a Java SOAP client capable of connecting to a LexEVSAPI SOAP service.

In the ./webServiceSoapClient contains a build.xml file that will construct a LexEVSAPI SOAP client. Before building, you may edit this build.xml file to customize the build process. Editable properties include 'wsdlURL' and 'webServiceNamespace'. An example configuration is below:

To build the client, use the command ant all from the ./webServiceSoapClient directory.

The caCORE LexEVS XML-HTTP API, based on the REST (Representational State Transfer) architectural style, provides a simple interface using the HTTP protocol. In addition to its ability to be invoked from most Internet browsers, developers can use this interface to build applications that do not require any programming overhead other than an HTTP client. This is particularly useful for developing Web applications using AJAX (Asynchronous JavaScript and XML).

The following table explains the URL syntax used by the caCORE LexEVS XML-HTTP interface, indicates whether specific elements are required, and gives examples.

Within the request string of the URL, the criteria element specifies the search criteria using XQuery-like syntax. Within this syntax, square brackets (/[ /]) represent attributes and associated roles of a class, the at symbol (@) signals an attribute name/value pair, and a forward slash character

Criteria statements in XML-HTTP queries generally use the following syntax (although you can also build more complex statements):

The following table explains the syntax for criteria statements within XML-HTTP queries and gives examples.

The examples in the following table demonstrate the usage of the XML-HTTP interface. In actual usage, these queries would either be submitted by a block of code or entered in the address bar of a Web browser. The servlet name GetXML in each of the examples can be replaced with GetHTML to view with layout and markup in a browser.

Because HTTP is a stateless protocol, the caCORE LexEVS server cannot detect the context of any incoming request. Consequently, each invocation of GetXML or GetHTML must contain all of the information necessary to retrieve the request, regardless of previous requests. Developers should consider this when working with the XML-HTTP interface.

When specifying attribute values in the query string, note that use of the following characters generates an error:
[ ] / \ # & %

In place of the existing EVS 3.2 object model, caCORE LexEVS is making a gradual transition toward a pure LexBIG back-end terminology server and exposure of the LexBIG Service object model. caCORE 3.2 and earlier required a custom API layer between external users of the system and the proprietary Apelon Terminology Server APIs. With the transition to LexBIG, caCORE LexEVS can publicly expose the open source terminology service API without requiring a custom API layer.

Since in many cases the objects returned from the LexBIGService are not merely beans, but full-fledged data access objects (DAOs), the caCORE LexEVS client is configured to proxy method calls into the LexBIG objects and forward them to the caCORE server so that they execute within the LexBIG environment.

To address LexBIG DAOs, the LexBIG API integration incorporated the addition of (1) Java annotation marking methods that can be safely executed on the client side; and (2) classes that can be passed to the client without being wrapped by a proxy. The annotation is named @lgClientSideSafe. Every method in the LexBIG API that is accessible to the caCORE LexEVS user had to be considered and annotated if necessary.

LexBIG integration with caCORE LexEVS was accomplished using Spring Aspect Oriented Programming (AOP) to proxy the LexBIG classes and intercept calls to their methods. The caCORE LexEVS client wraps every object returned by the LexBIGService inside an AOP Proxy with advice from a LexBIGMethodInterceptor ("the interceptor").

The interceptor is responsible for intercepting all client calls on the methods in each object. If a method is marked with the @lgClientSideSafe annotation, it proceeds normally. Otherwise, the object, method name, and parameters are sent to the caCORE LexEVS server for remote execution.

The Mayo Clinic wrote the LexBIG 5.0 API. Documentation describing the LexBIG Service Model is available on the LexGRID Vocabulary Services for caBIG GForge site at https://gforge.nci.nih.gov/frs/?group_id=14.

The DLB API is strictly a Java interface and requires Internet access for remote connectivity to the caCORE LexEVS server. Access to the DLB API requires access to the lexevsapi-client.jar file, available for download on the NCICB Web site. The lexevsapi-client.jar file needs to be available in the classpath. For more information, see the section, Installing and Configuring the LexEVS 5.0 Java API.

The following code sample shows use of the DLB API to retrieve the list of available coding schemes in the LexBIG repository.