You can use these documents to uncover fact-based associations between genes and diseases or genes and compounds. In addition, you can evaluate the evidence from which these associations were extracted (that is, the sentences from MEDLINE abstracts) and the codes and details that describe these associations. Other annotations, such as sentence status flags, negation indicators, cell line indicators, and organism data are information-rich and may be used to limit queries of the data, for example. Additional information is available in the Using the Cancer Gene Index subsection of this document.

Descriptions of the Gene-Disease and Gene-Compound DTD elements are provided below.

#PCDATA stands for Parsed Character data. Declarations of element type #PCDATA mean that XML Parsers will parse the text contents found between the start and end tags of an XML element that correspond to this DTD element.

Child elements appear in the same order in the XML documents as the DTDs, and they can themselves have one or more children, as described below.

Many free XML parsers exist, as do parsing modules or libraries for a variety of common programming languages, that will quickly divide the Gene-Disease and Gene-Compound XML documents into their component data. Parsed data can be stored in a database or other data management application and be computed against. Alternatively, you may prefer to write code that recursively loops through the XML and extracts the information that you desire. As end users parse the Cancer Gene Index data into various formats (for example, database dumps or tab-delimited text files) or create code to walk through the XML, they are strongly encouraged to make these versions and the code available by posting them to the Cancer Gene Index User Community Parsed Data and Code web page.

The following subsections provide information and tips to maximize your use of the Cancer Gene Index XML files.

Refining Your Searches with Flags and Indicators

You can use the Cancer Gene Index to discover associations between genes and diseases or genes and compounds. These associations were derived from the literature using a sophisticated automated process, and thus not all of the extracted gene-disease or gene-compound concept pair associations were found to be factual by expert human curators in subsequent validation steps.

If you would like to restrict your queries of the Cancer Gene Index data sets to only those concept pairs that were validated as being truly associated, filter out information where the SentenceStatusFlag is "no_fact" or "unclear" and where the NegationIndicator is "yes."

You also, of course, can take advantage of other annotations such as CelllineIndicator or Organism names. For information about the status flags, indicators, and other annotations within the XML documents, refer to the Cancer Gene Index Data, Metadata, and Annotations wiki page.

For information about the meaning of the codes, details, and other data and annotations within the XML documents, refer to the Cancer Gene Index Data, Metadata, and Annotations wiki page.

Although the NCI Thesaurus provides compound, disease, and gene ontological information and was used to create the data resource, this information is not easily deduced from data in the Cancer Gene Index, itself.

The NCI Thesaurus Concept Code for a gene, disease, or compound term is also its EVS Identifier.

To view disease, compound, and gene ontologies, open a new browser tab or window and navigate to the NCI Thesaurus web page, enter in your gene symbol, matched term, or NCI Thesaurus concept code (2, "ovarian serous adenocarcinoma"), and click the Search button (3). If you need help finding your gene, disease, or compound term, click the Contact Us link at the bottom of the page (4). 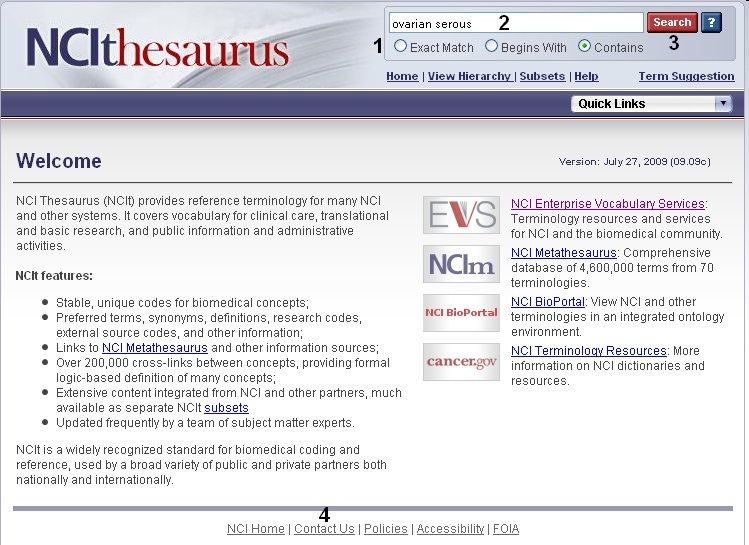