The CRF Harmonization and Standardization initiative has undertaken the task of harmonizing and standardizing case report forms for cancer clinical trials by first dissecting the CRF into modules and tackling smaller sections of the CRF 5 areas at a time. The general process includes collecting an inventory of forms related to the information generally captured in that module, for example, On-Study Forms are collected to gather Agent information. The group then goes through all the forms and identifies those fields that are relevant to that module (area), partitions the fields as either Mandatory, Conditional or Optional, and then identifies appropriate Common Data Elements (CDEs) or creates new CDEs to accurately capture the metadata for the harmonized fields. Once the group identifies all the fields and CDEs to be collected in that module, these are sent to the Clinical Trials Community for review and comment, the comments are addressed, and the final list of fields are presented to the Clinical & Translational Research Operating Committee (CTROC) for final approval. After CTROC approval, the CDEs are brought to the Vocabularies & Common Data Elements (VCDE) Workspace for review as caBIG Standards. Once the CDEs are made standard, the module is officially available for use on cancer clinical trials.

In October of 2009, the need for an Expanded Committee Review was identified.  A change in the community review process was instituted in the Spring of 2010. The revised process is as follows: 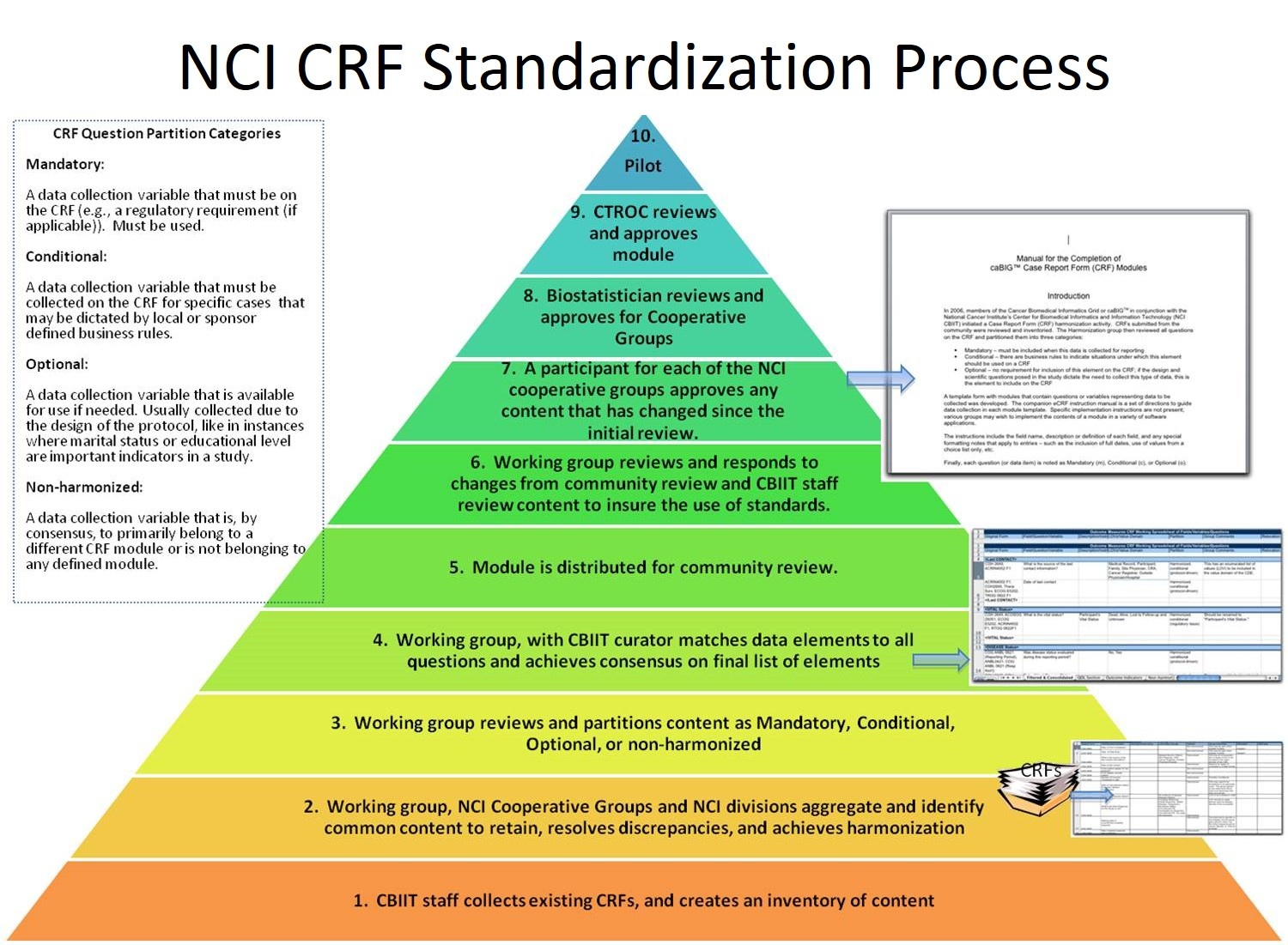 The first Round of the CRF Harmonization and Standardization Project addressed a single module, Demography. This work began in June 2007, and the module has gone through the the entire process and has been approved by CTROC, and the CDEs have been made standard. The module is undergoing implementation/deployment for use in cancer clinical trials.

Round 2 included Adverse Events, Baseline Assessment, Participant Identification, Registration & Enrollment, and Protocol Deviations. Seven modules were completed from those 5 areas, which are Adverse Events, Medical History, Physical Exam, Participant Identification, Registration, Enrollment, and Protocol Deviations. These seven modules have been vetted by the Community and approved by CTROC. In the spring of 2010 the seven modules entered expanded community review. Community review completed three rounds of evaluation through 2010 and in March of 2011 was forwarded to NCI leadership for finalization.

Round 3 modules included Agents (looking at both standardizing vocabulary and the variables to be collected), End of Form, Footer, Header, Laboratory Tests/Results, Outcome Measures, and Staging/Extent of Disease. These modules were reviewed by the Community, presented to CTROC, and finalized in April of 2011.

Round 5 modules included CT Image Acquisition, CT Image Agent, Diagnosis Gross Pathology, Diagnosis Metastasis, Diagnosis Microscopic Pathology, Diagnosis, Survival/Follow-up, Image Administration, Lost to Follow-up, Progression, Response and RECIST.  A final review of the Round 5 content was completed in early 2018.  With the exception of the RECIST form, all other forms were finalized and released in June 2018.  The RECIST working group has additional comments regarding this content and will make recommendations for updates.

The CRF Harmonization & Standardization project was initiated to provide a harmonized and standardized set of variables to be collected for oncology clinical trials that could be implemented to facilitate data entry, and study aggregation, comparison and analysis. The CRF collection process for Rounds 1-3 only collected Case Report Forms specific for that module. However, prior to Round 4, the Workgroup Leads recommended collecting CRFs for all areas and doing a single CRF inventory for all remaining modules, current and future Rounds