General Equivalence Mappings, or GEM, is the mappings between ICD-9 and ICD-10 concept codes. There are four types of mappings:

Each mapping is one text file with three white space separated columns. Column one is the source concept code, column two is the target concept code and column three is a five digit numeric character field that describes the relationship between the source and target codes. For detailed information on how to interpret the relationship details the reader is referred to either one of the following documents below.

The term 'map' or 'mappings' gets overloaded a bit in this document. In one context it may refer to the GEM data, which is a map (one concept maps to another concept or set of concepts). While in another context how the GEM data gets converted into LexGrid objects is a map.

For each GEM data set loaded, a LexGrid coding scheme will be created.

The GEM contains information that maps concepts to one another. This kind of data is represented in LexGrid as an association. So the coding scheme will consist of mostly associations. In some special cases, a concept will be created which will be detailed later in this document.

Consider the image below of a small set of GEM mapping data: 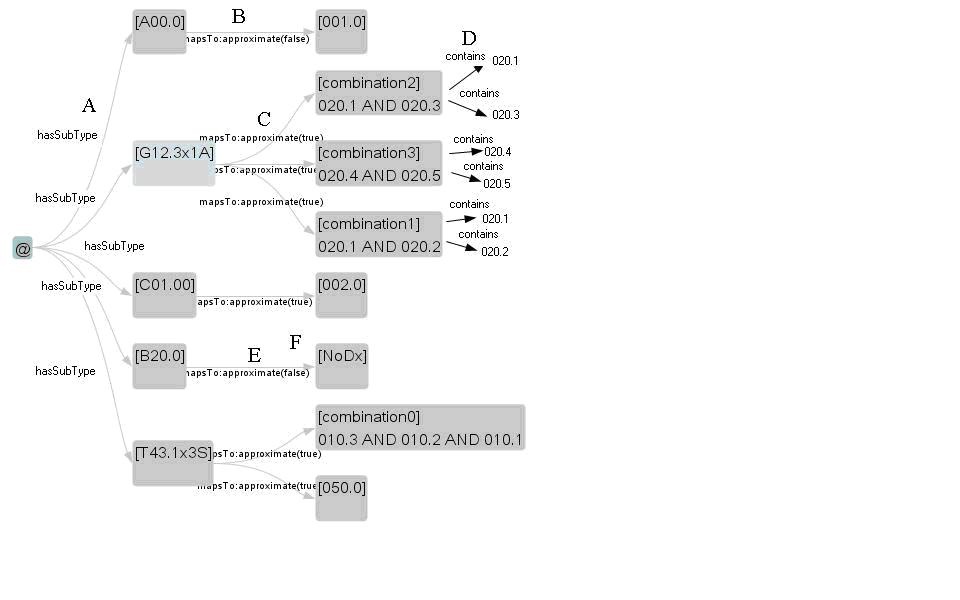 The loader creates a default root node @, and each unique occurrence of source concept code in the GEM file is associated with the root node via hasSubType association (A). The GEM data is mapped to instances of LexGrid associations that have a source concept code and target concept code. GEM can have a few types of situations the loader must handle. Case B, shows a single mapping. The type of association used is 'mapsTo'. For each mapsTo instance, a qualifier is set (approximate true or false) indicating if the two concepts are an exact mapping. In B's case it is set to false, meaning it is an exact map.

GEM data is not always a straight one-to-one mapping. Sometimes a combination of target concepts represent the desired map. Or there may also be a number of possible target maps. An example of this is shown in C. When a combination map is found in the data, the loader will create a 'concept' that represents combination map. Also, the individual concepts that make up the combination are recorded in LexGrid using another association type created by the loader named 'contains'. An instance of the contains association D, where the source is the combination concept and the targets are the individual concepts.

For details on how combination maps are derived please see the GEM guides referenced above in the Source Data, General Comments section.

GEM data may also contain occurrences of data where there is no map for a particular concept. This is show in E, F where the association type is mapsTo and the target value is NoDx.

What is meant by GEM meta data is data that would describe the GEM data, such as version, name etc... This kind of data is
stored in LexGrid as coding scheme information and coding and supported attributes. However, none of this type of nformation is provided in the GEM data files. So the loader will populate this data with default values. When the loader is executed must be given a file location, version, and GEM type. The loader will fill in the default data based on the GEM type supplied to it.

Also, the following attributes are supported by the coding scheme:

In the tables that follow, all showing values from LexGrid table supportedAttrib (as above), only fields with non-null values and non-generated values will be displayed.

As mentioned in the Mappings: General Comments section, GEM mapping data, much of it anyway, is represented in LexGrid as associations. However some concepts are created by the loader in cases where GEM target data is a combination of concept codes.

When an concept is created the LexGrid tables entity, entityType and property are updated.

A LexGrid relation container is defined to hold LexGrid association definitions (mapsTo, contains, etc). Instances of the defined associations are created to represent the GEM data. Note the isMapping flag is on to indicate the associations are mappings.

For each association an entry will be made in the following tables: associationPredicate, entity, entityType. Only mapsTo is shown in the examples below.

A note about the above entityCodeNamespace value. While official vocabularies and terminologies like ICD-9 and ICD-10-CM have registered unique Object IDentifiers (OIDs) mappings don't seem to. So for the GEM mappings arbitrary values were chosen and used as default values in the GEM loader. For more information on OIDs: http://www.oid-info.com/

In a general sense the GEM data consists of a source concept code and a target concept code and information describing the relationship. These relationships are described in LexGrid as an instance of a particular kind of association with source and target information. The key pieces of LexGrid data are the sourceEntityCode (from the first column of GEM data) , targetEntityCode (second column of GEM data) sourceEntityCodeNamespace (information that indicates the terminology the source code came from- usually a URI or URN value) and targetEntityCodeNamespace and finally the reference back to what type of association this is (mapsTo, hasSubType etc) via the associationPredicateGuid.

A couple examples may help. If we use the mapping illustrated in figure 1 above, an ICD-10-CM to ICD-9 diagnosis codes) we can see C01.00 maps to 002.0. And the mapsTo association has a qualifier that says this is an approximate is true. For this example we will only examine the mapsTo association. Note however the loader also creates a @ hasSubType C01.00 association.

The loader knows this is a GEM mapping of ICD-10 to ICD-9 diagnosis codes. The loader will only know this from the mapping-type parameter passed to it when it is executed. So sourceEntityCode is formatted with a decimal and the sourceEntityCodeNamespace is given the URN for ICD-10 CM. Likewise the targetEntityCode is formatted and the targetEntitycodeNamesapce is give the ICD-9 URN. The link back to the defining association (mapsTo) is provided with associationPredicateGuid. Also note, this association had a qualifier so the entityAssnQuals table was updated. The referenceGuid value is the link back to the association this qualifier belongs to.

Now for an example of a combination target code. Again, referring to figure 1 above, we can see the mapping:

In this example we will look at the mapsTo and contains associations. Reminder: the loader will also create a hasSubType association. The mapsTo association qualifier value is handled as described above.

The associationPredicateGuid refers back to the contains association and the target information, code format and namespace value are set appropriately for the ICD-9 target vocabulary.

The example above showed default data for a ICD-10-CM to ICD-9 diagnosis codes GEM. The default data used by the loader for the other GEM data sets is shown in this section.